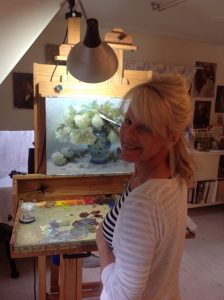 “In my many years of study I have learned a language to express through painting. While painting, I tend to think of the process as a sense of “visual poetry”. My intention is never to depict a photographic rendering but a painterly representation of the essence of the subject .

The lush delicacy of an English rose, the tenderness of a mother and child or the unique beauty of an heirloom eggplant are just a few of the infinite array of color, form and harmony nature never fails to provide.” – Brenda Lee Gibson

California fine artist Brenda Lee Gibson discovered her passion for art at an early age.  Noticing her constant drawing, her intuitive grandmother provided her with a steady stream of supplies, paper and pencils.  On Brenda’s twelfth birthday, her grandmother gave her a gift that would change her life: a paint-by-number oil painting kit.  No longer confined to paper and pencils, Brenda was seduced by the creamy texture and luminosity of oil paint.

After years of exploring many other forms of art and different mediums, Brenda eventually realized her true passions lie in figurative oil painting, and is inspired by masters of the past including William Bouguereau, Anders Zorn, Gustav Klimt, John Singer Sargent and Nicolai Fechin.

Recognizing the dedication and focus needed to succeed as a figurative painter, Brenda dedicated  years of intensive study at the acclaimed California Art Institute, learning the fundamentals of design, values, edges and light, and the art of the human form.  While there, she studied with talented, accomplished artists such as Jeremy Lipking, Rick Morris, Aaron Westenberg, Ryan Wurmser and Michelle Dunaway, to name a few.  Brenda’s skills continued to evolve under the private instruction of national award-winning artist Joseph Todorovitch, whom she greatly admires.

As Brenda’s studies progressed, her natural talent and abilities improved, as she developed a means of expressing her deepest feelings in oil paintings.  “My greatest inspiration lies with the bond shared between a mother and child,” she says.  “My ultimate goal is to capture on canvas the emotion I wish the viewer to feel in his or her heart.”

Brenda continued her academic studies at the Los Angeles Academy of Figurative Arts where she worked with talents such as Russian-trained Vadim Zang, Ignot Ignotov, Stacy Kamin and Michael Seigal. In addition to numerous workshops, she has had the opportunity to study with Henry Yan, the extremely talented Chinese instructor of the San Francisco Academy of Art.

After these years of intensive figurative life study, Brenda has discovered an entirely new, and deeper, appreciation for great figurative painters, both past and present. Academic study, so often not given full discourse by modern art lovers, is the foundation needed to acquire the skills and tools to express what is in the heart and soul of an artist, and gives artists the unlimited freedoms to be all they can be.  Believing a good artist should always continue to learn and evolve, David Leffel asks the thought-provoking question, “How do abstract painters know when they are getting better?”

Brenda resides in picturesque Lake Arrowhead, California, with her husband, devoted french bulldog, Pierre and chow Chang who lives to guard his kingdom. Blessed with two grown sons, one daughter and four grandchildren.   Brenda says, “It’s truly a luxury to live here and pursue my passion.  There’s not a day that goes by that I don’t realize how fortunate I am.”

Brenda was recently recognized with the 2009 Award of Excellence for “Instinct” (oil on linen, 16 x 20) by the California Art Club.  In addition, she has been awarded the following: